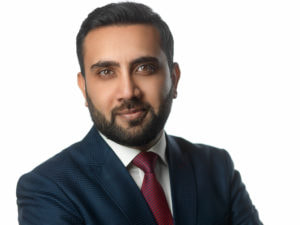 Syed Ali Saeed is an Indiana University School of Law Graduate with a background in Mechanical Engineering. Ali is a practicing attorney and founding partner at Saeed & Little, LLP. He focuses on complex litigation including class actions and mass torts. Additionally, Ali also serves as general counsel for several non-for profit organizations and small to mid-sized businesses.

Ali has been involved in numerous high impact class action litigations against corporations, banks, debt collectors, insurance companies and state governments on behalf of various victimized groups including employees, consumers, parents of kids with developmental disorders, prisoner and insured patients. As a consumer advocate, Ali has been part of some of the largest class action lawsuit in the country involving consumer protection statutes. Ali is heavily involved with the National Association of Consumer Advocates (“NACA”), the largest consumer advocacy group in United States, where he serves as the chair for NACA’s membership committee. Ali is routinely asked to present on topics related to consumer protection laws and class actions by local and national organizations. For his professional contributions, Ali was nominated by his peers as a rising star in the Indiana Super Lawyer Publication in 2016, 2017 and 2018.
​
Ali is deeply engaged in the local Indiana Community and frequently volunteers his professional and personal time for various causes. He is the President and Founding Members of the Indiana Muslim Advocacy Network. For the past 10 years, Ali has been actively involved with Seeds of Learning, a non-for Profit Corporation aimed at promoting education in third world countries. He recently finished his term as the Vice President of Seeds of Learning and now continues to serve as a board member. Ali also currently serves on the board of Muslim Alliance of Indiana. Ali has been affiliated with the Muslim Alliance of Indiana for over 10 years in various capacities including a two year stint as a Director of Legal Services where he headed a domestic violence and immigration focused legal services program. Ali also currently serves as a board member for a local social justice non-for profit, Heartland Pro-bono Project and another immigrant’s rights focused non-for profit, the New Citizens Project. In 2016, Ali was a recipient of the Access to Justice Award for his efforts and contributions in the non-for profit world and promoting social justice.