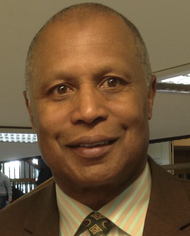 David Shaheed was elected judge in the Marion County Superior Court in 2002 and re-elected in 2008.  He currently serves as the judge of Civil Court 1.  Prior to August 2007, he was the judge in Criminal Court 14 and presided over the Drug Treatment and Reentry Courts in Marion County.   Shaheed has been a judicial officer in Marion County since 1994 and has spent an equal amount of time with both the criminal and civil courts.

In addition, Shaheed made pilgrimage to Mecca, Saudi Arabia in 1987 and was leader of a delegation of nearly 500 American Muslims who made pilgrimage (hajj) in February 2003.  Shaheed has worked with Muslim groups within the United States and has been in dialogue with Muslims in the United Kingdom, the Middle East, Africa and Italy.  Judge Shaheed was part of the delegation of Imam W. Deen Mohammed in 1999 for the Muslim-Focolare dialogue.